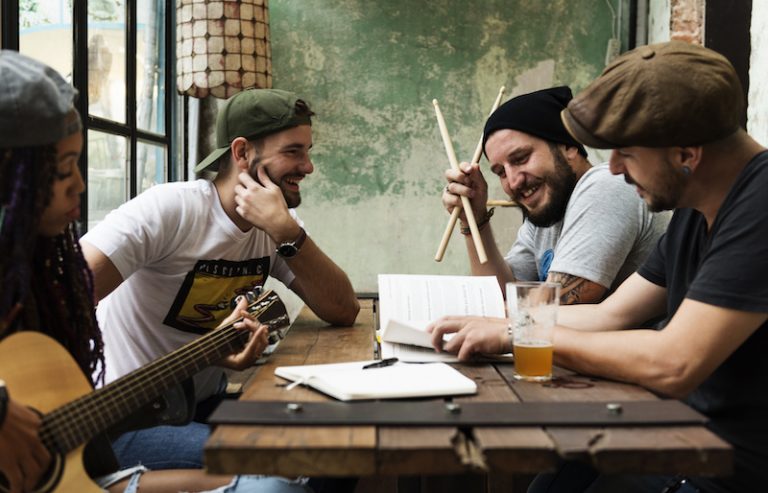 The music industry has left artists by the wayside. Fraught with the pressures of making money in the wake of streams, free downloads and a singles market, that followed a long reign of “the album”, the industry is no longer willing to fork over cash for much needed A & R. As a result, artists are left on their own to put their sound and projects together, taking all of the risk – but are they making their mark? Or failing to come to the table?

On one hand, it’s a great thing that artists don’t have to wait to get signed to release their own music and connect to fans.. On the other hand, music is being released too early in the marketplace without the chance to fully develop – and as a result, artists are releasing material that is often half baked. And add to that, that in order to grow a music brand in the marketplace, a musician’s attention is spread ultra thin with the promotional tasks of branding, marketing & promoting their material — so much so that the music ends up suffering from a lack of attention, nurturing and love.

The biggest trap that steals artists muse away from them is….

Most musicians think that the way to get thousands of fans and industry attention is by becoming a better marketer.

Look at Adele. She sold over 30 million records of 21 without even touring. Yes she marketed, but the content was so good that once her album swept the airwaves, it didn’t need much more to sweep the masses off their feet. The moment we heard it we were swept off our feet obsessively clicking the play button. “21” was that good. And it wasn’t luck. It was smarts. It was about her songs, her voice and her message. It hit us square in our solar plexus – immediately. Like an old friend coming to bail us out of our confusion or despair. Adele knew that the only way to capture the world was by tearing out her and serving them to us on a silver platter ~ the best one she could find.

The way to get thousands of fans and major industry attention isn’t by making your music “hip” ~ it’s by making art – by “taking your broken heart and making it into art.” by making the best damn music you possibly can.

So, do you have it? Have you made that music yet?

And oh yeah, what is A & R? A & R is the process that labels used to use to help an artist find their sound. Like a sculptor at a pedestal, it’s the process of refinement. To chip away everything that doesn’t belong, for a long enough period of time to reveal the art inside the chunk of rock.

Musicians, music, music artists need the process of A & R. It’s a critical process that without, leaves so much on the table, that an artist may never discover their best work and die with their music still in them.

Here’s my 3 top industry tips for how to nurture the process of A & R in your next project:

1. Dig Deeper Than You Think You Can ~ Mine for Gold.

Just know this. The thing that is going to take you over the top and grow those thousands of fans is already inside of you. The trick is to find it. And it’s deeper than you think. Like a miner mining for gold, you have to go down into that big black cave and find it. Artists whose records hit big, tap the big vein. They figure out how to access that deeper layers – the great reservoir of truth — that lives under the surface tucked away out of sight.

Next, know that even if you’re a good songwriter, you’re probably not digging deep enough to get to the gutsy stuff. The stuff that moves people, stops them in their tracks and makes them follow you to the ends of the earth.

When an artist comes to me for A & R, we start the process with a series of conversations about them, their life, their musical history, influences, obsessions. We talk about their deeper emotional and psychology – the stuff that lives under the surface of a person’s exterior. We talk about the things that have hurt them deeply, or that shut them down. We talk about those critical defining moments when something happened and they changed, or when life changed them. We mine for the gold, and to do that, we gotta get to what’s behind those locked doors. And then once we’re there — we excavate the precious gold that lay waiting for us to find it. A good A & R person is like a really good friend, psychologist, therapist, intuitive and musical genius all rolled into one. Someone who “gets you” and most importantly, someone who’s “got your back.” That is how you mine that gold that lies waiting inside of you to be spoken.

In the words of the late, great Carrie Fisher,  “Take your broken heart and turn it into art.”

2. Lock Yourself in A Room And Don’t Come Out Until You Have A Record.

Hibernation is not an unusual tactic used with musicians during the writing of a record. Distraction is the biggest killer of creativity, and in today’s iPhone, social media-frenzied world, it’s a bigger challenge than ever to stay focused long enough to get to the good stuff. And time is what any creative project really needs to open up the process and to tap that inner well where all the gems lie waiting to be discovered.

Given that time is a luxury we don’t all have, or can arrange, it’s really about doing what you can to carve space more deliberately. Like turning off your phone, going off the grid for an afternoon, planning a “writing weekend” where you go off to a cabin away from the world. Grab any and every opportunity you can for longer stretches of writing, whenever you can.

To kick off your next project (or uplevel your current one), it’s a good idea to find an A & R rep to help. Most of these people are now working in some other facet of the industry since labels let them all go. That’s why we offer A & R, because we believe it is the critical difference in artists that make an impact. There are other A & R companies out there, but most I run into come from the label mindset which is overly corrupted by the “commerce over art” mentality which pushes artists to sell out over making great art. We believe in the “art over commerce” mentality, that ultimately wins big like Adele or Sam Smith who were unlikely “pop stars” in a world that values the surface of the business.

It’s important to find an A & R rep who really gets you and what you want to do in music. Who doesn’t poo poo your ideas and values. Someone who has experience and a track record, who can help you identify what you have to say and the musical direction to move towards. This is a detailed and involved process. We spend 1-2 years with an artist and sometimes a little more. It takes time to really stand out.

If you’re looking for a fast track A & R and you’re on a budget, you might want to start with some programs to set the stage and get you digging, and then come get my guidance. Many of our artists have totally upleveled and A & R’d their records from our programs alone —  so much that they walked right onto the Billboard charts. Check out Mark Etheredge or The Ragbirds who were in the charts for up to 15 consecutive weeks right out of our program. Or Sarah Sellers who had a record deal and licensing deal offer on the table Day 1 of her first release ;).