DIY has been a good thing for the music industry. It has allowed artists to release their own music and get out there direct to fans. But there is a huge downside. And that is, that the material going out is half baked and not worked on enough to get to great. There is a sea of independent artists are out there on their own, writing songs without feedback and recording records without a team. And unfortunately, these artists and songs, are losing out on the fine details of what makes records that stand out and are getting lost in the shuffle.

Now look, as a songwriter myself, I used to hate critiques — at first. Probably because the critiques were in songwriting class coming from writers who were either at my level or not as good as me. And you can’t “undo” someone’s comments, even if you don’t agree with them they rattle around in your head. But once I became a better writer (and I’m sure some of those critiques – at least from the instructor – made me so), feedback became valuable. I say “feedback” over “critique” because any song can be critiqued – it’s a matter of opinion at some point. I could even critique great songs I love – you can always find something wrong given your taste.

But feedback is different. Yes, there may be some critiques on song structure, arrangement etc to improve the song, but feedback amongst peers is more about whether the song has emotional impact and staying power – or whether the production is “serving the song”,  stepping on the song or squashing it. Feedback is also about whether or not that song belongs on your record, whether it can go the distance for you. And that, is really important stuff to know.

When an artist writes, records and produces the song solo, they lose out on feedback. The kind that can inform their decisions and ultimately the success of their record. Look, it’s tough for one person to have all the perspective. No matter how good you are, everyone can benefit from the right feedback – from people whose opinions you admire and trust. All successful artists have the benefit of this process. Some from their record labels (which sometimes are too controlling and too commercially minded, squashing the artistry) and some from their Inner Circle of trusted advisors.

Coldplay talked about using their Inner Circle when they finished recording X & Y. They came out of the studio, showed the recordings to their Inner Circle and from the feedback, went bravely back in the studio to re-record the whole album. They knew they didn’t have what they needed to grow their career further. Look, it’s critical for every artist that each album keeps them in the game, and there’s a ton of competition – even if it’s with yourself.

My advice to you, is — wherever you are in the record making / songwriting process:

Develop an Inner Circle of 5 or 7 people whose opinions you trust and admire. Include amongst them: 2-3 industry folks, a music fan, a music lover, a songwriter who is better than you etc. Make sure they all have excellent taste in music and tell them you want the brutal truth. That their opinions will help you make informed decisions on your next record and help you be a better artist/songwriter. Show 2-3 songs at a time. Be open to what they have to say.

2. Collaborate on Your Next Project

Especially if you put your music out there and hear crickets, you might want to try collaborating a bit more next time. The definition of insanity is “doing the same thing over and over again and expecting different results.” Consider hiring a Team for your next record project. Big records have big teams. Lots of the right people in the right seats, ensuring the success of that record. From the artist to the co-writers, to the right producers, mixers, mastering engineers (not all one person), to the vocal arranger (yes, and if you’re looking for one reach out to us), there are a team of brilliant minds helping make that record the best it can be. Don’t do it all yourself – get the right people on your record and watch it fly the coop! Even one additional team member on your next record could make the difference. Hint: Try a vocal arranger. You won’t believe how much more emotional your vocal is! 🙂

Another important collaboration is co-writing. Don’t be afraid to co-write with people better than you, and up your song craft. You can always write on your own, but also experiment with co-writers. Most big records out there are co-written. Co-writing, when you find the right writer, can bring out more that you could on your own – from you and them. It also makes writing more fun and creates more content faster. Plus, you get the benefit of two heads, which can be better than one – think Lennon & McCartney, Elton and Bernie… And — you just might be lucky and find that magical partnership that changes everything.

Looking to up your co-writing craft? Co-write 26 songs in 26 weeks in our 6 month Songwriting Circle! You’ll be ten times the writer you are now! 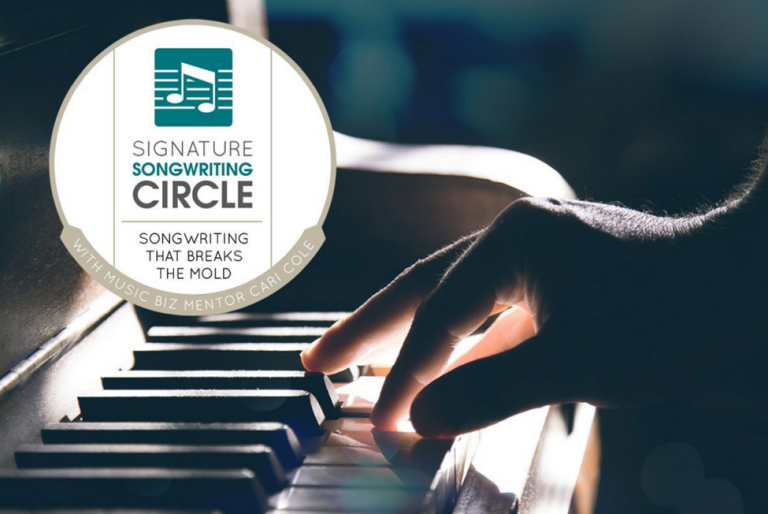