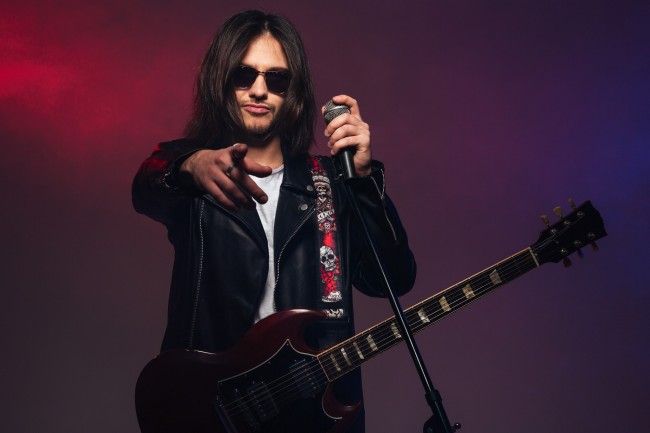 The first thing people hear is your voice.

Sometimes it’s the only thing they hear.

They don’t hear the 15 years of playing guitar, or the 500 concerts played.  It’s your voice that takes the lead and resonates loud and clear, front and center in most people’s ears.

If you’re an indie artist out on tour, you might be wishing you had a better voice, that you’d worked harder on it, but you don’t know if you’ll last past this tour, if it’s worth putting in the time… so it’s a “wait-and-see” kind of thing.

“Yet your voice is your brand. It’s not something you can hide in the mix. It speaks for you loud and clear, for good or for bad.”

But maybe you don’t work on your voice much because you are afraid it won’t get better, or you have a deep insecurity that it’s not your strong suit, or you’re secretly afraid that you suck. You might. But you also might not.  Either way, you don’t have to continue to suck. It’s all up to you.

Everyone sucks at first. But the difference in those who deliver is that they put the time in to close the gap. They pushed through that period of time when they didn’t sound good to get to the good stuff. They had more “tolerance” to cross the bridge. And you can too, if you decide to.

The other day in our Signature Songwriting Circle, an artist was presenting his song to the group. He was the rough and tumble artist type.  Both arms decorated with detailed tattoo’s, nervous sweaty palms and a typical self effacing nature. He forewarned me that he wasn’t a “real singer” – that vocals were hard for him, so I thought, okay, so he’s not a seasoned vocalist. But once I clicked play, I was astounded. The extreme musicality was not only unexpected but a surprise that it was on the level it was. Scorching guitars over a heavy crunching metal drums and bass with great melodies and arrangements … everything in their rightful place, so much so it would put a band like Evanescence to shame. Every instrument played by him, recorded on his laptop, and it sounded like a serious rock metal band (and I don’t say that lightly.) And yeah, his voice hadn’t found itself yet, but I heard a good tone through the screaming. As a coach I could hear the potential and possibilities. I knew where he could go, and that I could get him there. On top of all that, his lyrics were deeply emotional and poetic. It was magical.

He was well worth it.  But like a lot of artists, he wasn’t sure. Because his voice wasn’t where it needed to be, and it scared him and disappointed him at the same time. What he envisioned in his head wasn’t coming back through the speakers and he was at a loss for how to make that happen. Worse, he didn’t think it could happen.

But don’t you dare stop there.

Anyone who has a stellar voice (whatever your definition of that is) had to push through that gap. That period of time when what you’re hearing is a disappointment to you. And the only way to close that gap is a large volume of work/practice and the willingness to tolerate the dissonance in order to get there.

Never forget – your voice is what people hear first. Never think you can’t improve. I’ve transformed thousands of voices. No matter where you are right now, there is no excuse for slacking. You can do this.

Take Melissa. She came into one of my programs and I took a listen to her music. Her musical direction and message was great, but her vocals needed a lot. I knew we could totally turn it around and fast. I reached out to her and invited her to come work with me in my Vocal Mastery Program 1-on-1 for 3 months. By month 2 she was singing so much better it amazed us both. She flew into New York and we did a vocal arrangement that went on to be produced by Darryl Neudorf (Grammy nominated and Juno Award winning producer) In 3 short months, she was leagues from when I met her with a solid technique, new approach and tools that took her from amateur singer to pro. Bam.

“So even if you’ve taken vocal lessons and not gotten anywhere – you have to understand that you had the wrong coach.”

Not everyone can get you there.

The key is understanding how the voice works and knowing the best techniques to get there faster. And in a way that doesn’t interfere with an artist’s sound. I don’t teach my students to sing in a way that makes them sound uniform. None of my singers sound like each other, for good reason. It’s the instrument I go to work on. So you can sound better, right away, from the first session.

And then we go step by step and fix everything that’s broken and teach you how to sing a way that feels good, improves tone and pitch instantly. And if you’re nasal, throaty or breathy, we fix it. If you wear out fast, we fix that. If you want more range, we fix that too. If you need to sing with more emotion and make a stronger impact, we cultivate that – and quickly. It’s like training with an Olympic coach. And the goal is not for perfection, the goal for each vocalist to achieve their goals. We don’t stop ‘til we get there.

Because music and voice is ultimately about connection and communication, not solely how you sound. The artist with the best voice doesn’t always win (as we see on The Voice) – the artist who touches us the deepest wins. The way it should be.

Don’t compromise who you could become.

Want to talk more about how we can help? Click here for a no pressure quick call to get real help. It’s our mission that no artist go undiscovered. We’re here for you!