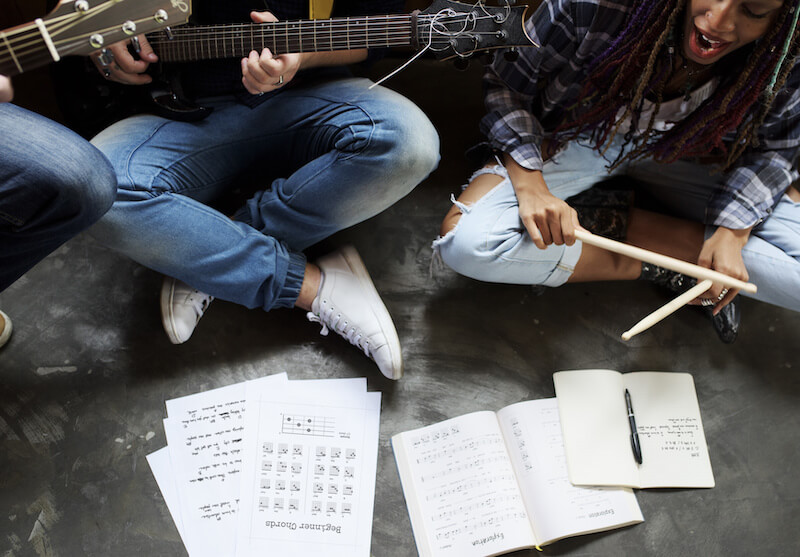 I think we could all agree that writing a GOOD song is not hard, but writing a GREAT one is not so easy. I’m talking about the kind of songs that have more emotion in them and connect more with your audience. The kind they will play on loop :).

Whenever you introduce a new single, EP or LP, is your moment to carve your indelible signature into the hearts and minds of fans and followers. You want to have all of the creative tools available to you to get the job done.

It starts with knowing who you are as an artist. Not a given. I once heard Clive Davis say something to the effect of – what people don’t realize we did with Whitney was to make her more comfortable in her own skin than even she thought she could be.

Bam. It struck such a chord with me that from that point on, it is my singular focus in guiding emerging artists to gain their foothold.

In the mid-eighties, I had the good fortune of getting my demo to Clive through a friend. His response letter said that while he found me to be talented, that “the songs did not have enough energy to break a new artist at this time.”

While at the time, as an artist, this was painful to hear, as I myself became an artist developer I came to know, completely understand and respect the meaning behind his response.

Truth is, it’s way more than a pretty face and killer voice – it’s about finding who you are and your real message. And then, it’s about having the guts to say it.

Like the breakthrough songs from legends like Cyndi Lauper’s with Girls Just Wanna Have Fun, Alanis Morrisette’s Jagged Little Pill, or Adele’s Hello.

Signature songwriting is about branding who you are into your songs and making them fit you like a glove. That requires introspection, contemplation, risk, fearlessness (too many of us are afraid to reveal stuff), and ultimately revelation to write better songs. Like Bob Marley’s Redemption Song or John Lennon’s Imagine.

The industry might tell you to write universal pop songs which translates to the novice songwriter (and even pro writers) as “generic”, lyrics that aren’t too heavy or revealing. The OPPOSITE of what great songwriting is all about, or should be about.

Great songwriting is like therapy, the more cathartic, the better.

If you want to break through as an artist no matter whether you’ve got five albums out or just one, don’t even think about putting your stuff out there until it’s got this kind of depth. Artists wonder why they have to go so deep to write better songs. What about writing sexy uptempo songs? I say, until you can write deep stuff, your sexy uptempo songs will be too vague and without substance and weight ;). Start digging.1. What Do I Write About?

I get that question all the time! I totally get that. Sometimes as an artist there would be long periods of feeling kind of blank… Check out our 4 Seasons of an Artist Blog to see what season you are in.

Me: “Well, what’s going on with you right now?”

Me: “So tell me about that life stuff…”

One of the things you can do on your own is to start doing research on “you.” Write out the 3 defining moments in your life that changed you, or hurt you deeply, or where you saw things differently than before.

Tip: Write a song about things that are hard to talk about.

Then apply that depth to what you are experiencing right now (might not be that different). #1 above will help you gain some perspective on yourself which is not easy to do, but is necessary for you to write anything of real value.

Hint: It’s hard to really write about something unless you’ve got perspective on it.

Someone said it at an ASCAP conference years ago and I still hear people quoting it. They said something like: Stop trying to get attention from famous people in the business who are out of reach. Look around for the smartest and most talented people around you and rise up together. Check.

Make your song your revelation, or victory lap. The thing you’ve been trying to say forever, but couldn’t until now. The thing that is hardest to say. What is screaming inside you to be said.

Our conditioning as humans tells us not to reveal what we’re thinking. Only to our closest friends. But songwriters have to pierce that veil. Say that thing that you don’t want anyone to know or that you feel super vulnerable about. Take intelligent risks with your songwriting. In music, vulnerability is rewarded.

What’s closest to the bone right now? If you don’t know, you need to spend some time getting to know yourself. Everyone who stands on the world stage has. You can too. Truth penetrates people – right to the solar plexus. Speak your truth. Only you can.

What is the payoff in your song? Be sure everything in the song points to the chorus. And please, make sure your first 4 lines foreshadow the payoff (the point). The more powerful your song’s payoff, the more we feel you.

If you want to get there faster (and better)… you might want to think about joining a songwriting program like ours below. It’s a great way to take a big jump ahead…

Learn more about my 6 Month Online Signature Songwriting Circle where artists get private A & R Direction + collaborative cowrites with our chart-topping CCVM Songwriting Team. This program has helped hundreds of artists refine their message, sounds, and direction to transform their careers.